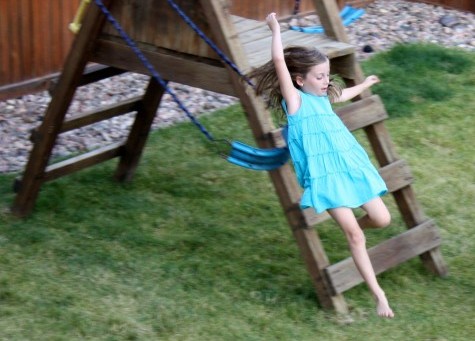 I know our neighbors – a super cute and sweet young couple – have heard me hollerin’ at my kids in the backyard more than once.

So when I noticed they were outside one recent afternoon, I saw my chance to redeem my perceived poor parenting impression. I asked my daughter if she wanted to head outside so I could push her on the swing. Since she’s always up for going outside, that was an easy yes.

Things flowed beautifully for about 15 seconds, then I failed to push her high enough or fast enough. She threw some sass and I scolded her. She stomped back inside.

I heard the neighbors shoveling mulch and mumbled to myself,

Am I the only one who has tried to stage the future to change the past? Tried to force something so you would look good? Whenever I try to control life, it backfires. It seems a daily {hourly?} fight to open my fists and let God do His thing without my forced help.

Sometime later, my neighbors mentioned how much they enjoy our kids and appreciate us as neighbors. I almost laughed simply because based on what I knew, I felt certain they thought the opposite. But the fact was they were observing little things I had no idea about. I make assumptions based on my limited vantage spot when the truth lies in much more than I can see.

God’s grace is unforced and easy and extends to areas seen and unseen. The whole picture of our past, present and future can only be seen from above. And when we realize this, then we’ve no need to stage anything.

Have you ever staged the future to change the past?