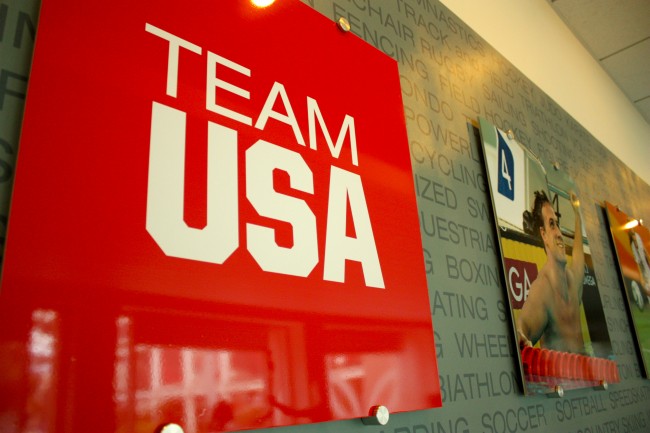 We snuggle together on the sofa slowly eating peach blackberry cobbler, eyes glued to the ‘flying squirrel’ on television.  Faith’s bedtime up and left long ago, and school starts bright and early the following morning. But it’s the Olympics, so we stay up and watch because we want to and we can.

And because the Olympics are the kind of reality television we can really get into.

So when a son asks to go to bed because he’s tired, I ask him if he could please wait until the next commercial? He sleepily replies okay and later asks what kind of mama makes her kids watch television.

Apparently, this kind of mama. And why do I enthusiastically encourage them to stay up and watch?

Olympic athletes arrive fresh from real life just like you and me. They are real people with stories as fascinating as their athletic skills. John Orozco worked at the gym he practiced in and handed the paychecks to his mom to cover their mortgage. MaKayla Maroney competes with a toe that’s been broken three times since May. Chad Le Clos already considered himself a winner by swimming in the lane next to his hero Michael Phelps, and then he ends up winning gold in the same race. On the world’s largest stage, these real deal people fall, they get back up again, and they inspire us to do the same.

Olympic athletes don’t mind bringing loved ones into the limelight with them. After the medal ceremony, Aly Raisman places her gold medal around her coach’s neck. Michael Phelps says he could never make history without his teammates or his mom. Gabby Douglas tweets the secret to her success is God because He gave her the talent in the first place. These folks – and so many others – aren’t afraid to be small, to make room for the village that’s gotten them where they are.

We live in a world that enthusiastically broadcasts people behaving badly. Oh, I realize some Olympic athletes cheat their way to the top while dragging their bad attitudes with them. But many are as chock-full of character as they are talent, and I love that my kids get to see that.

So I will keep my television on for the next ten days or so, and we will continue to park ourselves in front of it. My girl will handstand on her balance beam in her leotard and my boys will joke about some of the swimsuits. {Who really thinks white is a good color choice?} But we will also look for a bit of ourselves in the athletes and their families, and we will cheer for our favorites.

I heard this song on a gymnastics montage, and I loved it so much I had to find out what it was. Google came to my rescue and it is called “Home” by Phillip Phillips. If you can’t see the video, click here to watch Phillip performing it on the American Idol finale last May.

Do you also  enthusiastically encourage your kids to stay up and watch the Olympics, too?