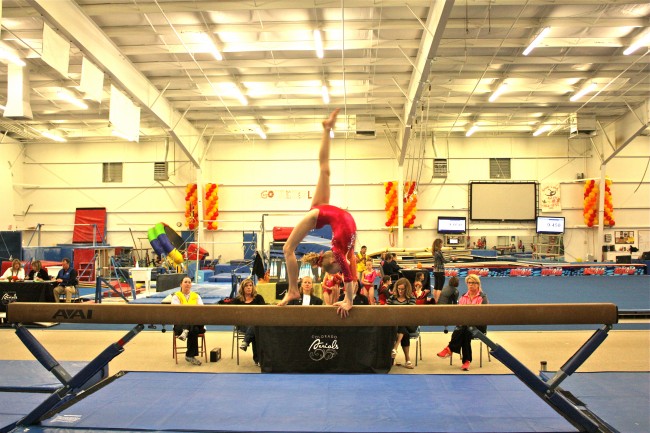 Faith and I walk into the gymnasium, eyes scanning the room for our friends. After finding their waving hands, we make our way to our seats next to them on the bright silver bleachers. Before long, their gymnast daughter, one of Faith’s best friends, takes her turn on bars. I’m amazed at the progress she’s made in the last year. Over and over, she flings herself into the air and flips fearlessly.

After her graceful dismount, I applaud and holler and see Faith doing the same, clapping as hard as she can for her friend. Because that’s what a good friend does: She cheers for her gal pal, humbling herself to lift up another.

After bars, our favorite gymnast has her turn on the beam. Oh my, that beam is her microphone and she positively sings with it! I think to myself:

Great day, how does she and these other girls make  flipping and flying look so easy? 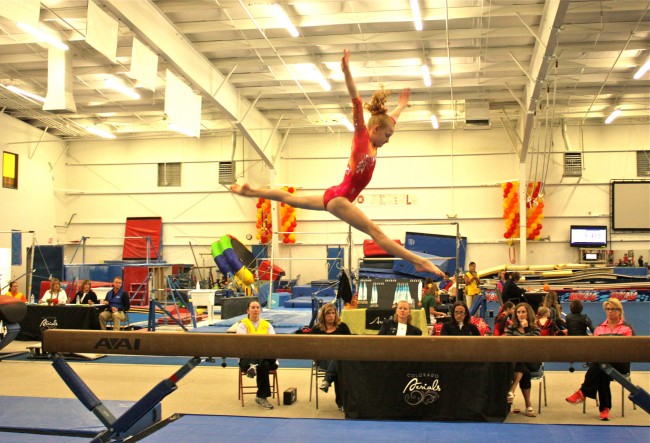 And that’s when I see how gymnastics and friendship have a lot in common.

We all know anything that looks easy on the outside takes a truckload of work on the inside. Because while those girls twist and turn effortlessly in front of us, the work comes in hours and hours of gym time behind the scenes. God gives the gift, and it’s up to each girl to hone it.

God gives us big girls the gift of friendships, but it’s up to us to hone those relationships.

Not long ago I wrote about how our whole family feels like we moved again even though we haven’t gone anywhere. Most of that is due to the fact that a large part of our community did move. And while I’ve struggled with this change, one positive result is I am more intentionally guarding the friendships I have now.

No matter the friendship season that surrounds you today – one of finding friends or keeping healthy friendships – this truth remains: Friendship takes work. But like a cartwheel versus a front tuck on beam, each season brings a different degree of difficulty.

If making friends feels just plain hard today, don’t assume it’s because you’re doing something wrong. Rather know that is just the way it is, so you’re probably doing things right. Because while the business of making friends and keeping them is hard,  it’s not impossible or hopeless, and there are ways to make it easier. 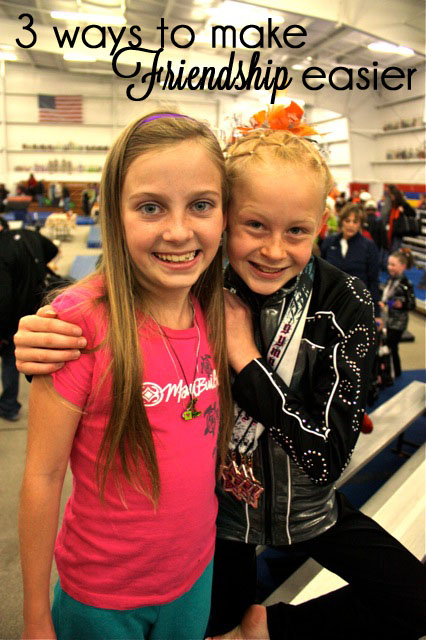 Don’t Compare No matter who is performing on the beam, the rest of the gymnasts turn away and don’t watch. However, after each athlete finishes, they wildly cheer for one another. This allows the girls to support each other while removing the temptation to compare performances.

Comparison waits in the wings of any friendship, desperate to make an appearance. Don’t welcome it. Comparing yourself to another will make you feel smug or small – there is no middle ground. God never compares. He has eyes only for you and says you are enough right here, right now. Commend your friends, don’t compare.

Remove Expectations Our gymnast friend doesn’t go into a meet expecting to beat everyone and get first place. She goes into a meet hoping to give her best, and any reward she receives is a gift from God.

Expectations strangle the life out of friendships. When we expect others to behave a particular way or give a certain thing, we are setting them up for failure. We are a bottomless pit of need, and no one is going to completely fill the cavern but Jesus. When we approach a friendship with hands open to give rather than get, we become a gift to that person. And in God’s economy, the more we give, the more we get.

Freely Fling Grace Our gymnast friend took a rare tumble off the beam. But she hopped back up, finished the routine, and performed beautifully in the next event, too. She could have dwelled on her mistake and not on her successes, but she didn’t. She picked up and carried on.

Give your friends the benefit of the doubt. Dwell on all the ways God uses them to bless you rather than on how they don’t behave exactly the way you’d like. This doesn’t mean you gloss over reoccurring problems or become a doormat. But it does mean that if you’re going to err, err on the side of grace.

And of course, give grace to yourself. Sometimes friendships flows seamlessly, sometimes it feels like you can’t move without taking a tumble. Whatever your friendship season today, know that it is tucked inside your Father’s safekeeping. He cares about every detail of your life, especially your friendship needs and concerns.

Because while making friends and keeping them aren’t easy, they are worth it.