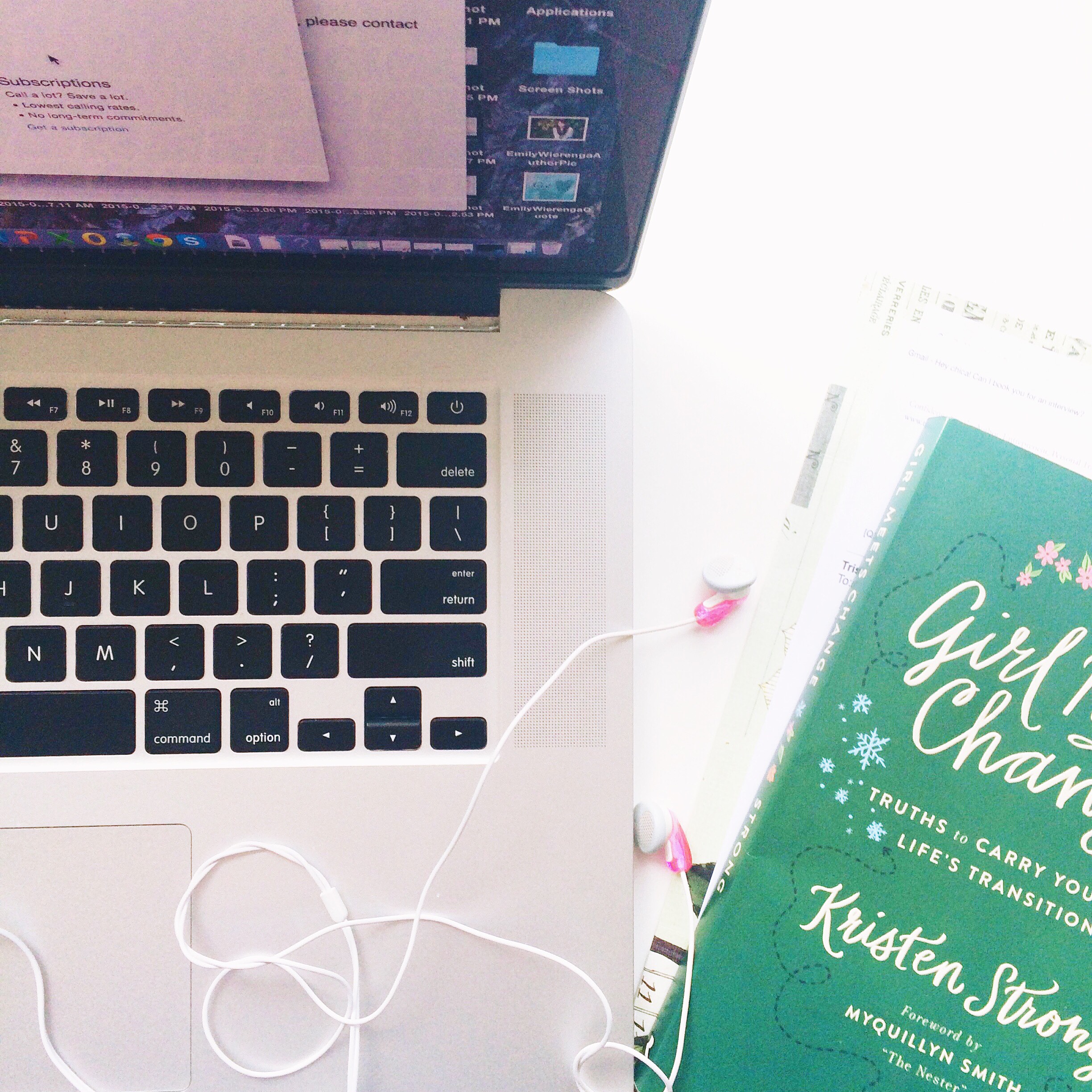 And while I know not all of you are writers, I know a portion of you are. So I wondered if that portion of women–especially those who desire to write a book themselves–might find value in a post that lends insight into my own journey toward a book deal?

Plenty of big deal writer folks have already talked about this before, I know. But when I first felt a stirring to seriously pursue writing a book, the impact of their good advice was dampened because they were already so many steps ahead of me. So if like me you have a modest but meaningful platform and desire to publish a book, perhaps my story will encourage you to keep on keeping on in that direction. 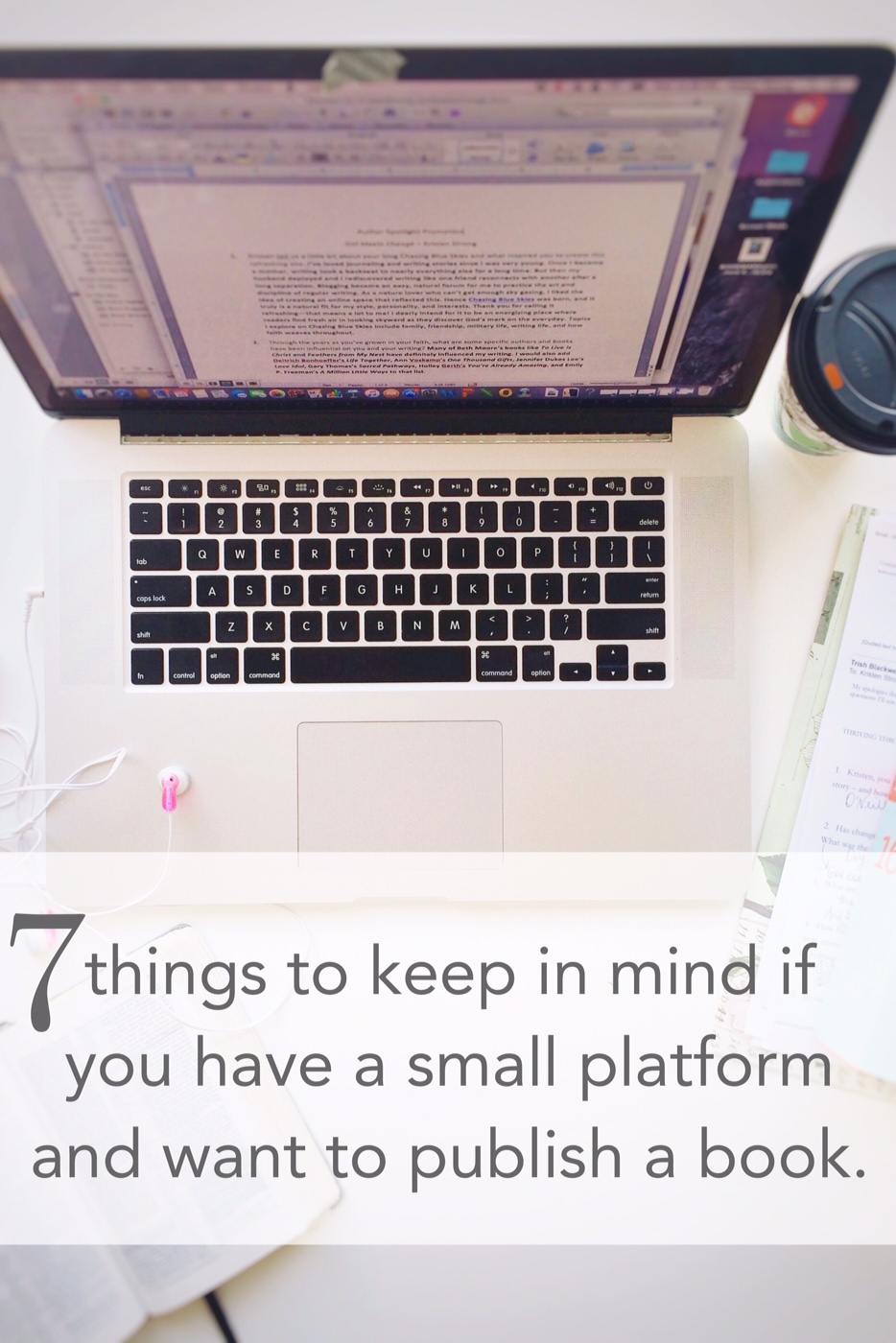 Here are 7 things to keep in mind if you have a small (or smallish) platform and dream of publishing a book:

1. Don’t wait to put your work out there. If you blog inconsistently or have only written in journals, I gently encourage you to move toward getting your work out in front of others more regularly. I first began to write in 2008 when my husband was deployed–a year before I started to blog. The first piece I ever wrote was an article for MOPS’s MOMSense magazine, and that article was picked up and published. Let me mention, however, that after this first article, I submitted several other articles to different online and print magazines. Most were rejected. However, I kept writing anyway.

I’ve made it known more than once that I desired to write a book since I was 10 years old. But for the first 2-3 years of writing more regularly, I did so because I felt a strong stirring in my heart that God was doing a new thing in me. I did it for my own personal fulfillment because writing was how I settled that stirring. During this time, few people noticed my work. I had either a non-existant readership (before I started to blog) or a small one afterwards. I certainly didn’t have an agent. But with those heart stirring pointing me toward a book, I went ahead and drafted a book proposal (using Mary DeMuth’s stellar book proposal guide  as a road map) and showed it to 2 different agents at the 2011 She Speaks Conference. One agent flatly rejected it, but the other agent liked it and took it back to her publishing committee. While the pub committee eventually rejected it, I learned a lot about how to push through the proposal writing process and how to present my work in spite of being super scared (and super small).

2. Write an e-book. Speaking of presenting your work, writing an ebook is another good way to do just that. This really falls under the heading above, but I think it was enough of a game-changer for me to get its own category.

In late 2012, I began writing an e-book for military wives called Serving You: 31 Days of Encouragement for the Military Wife. I released it on Memorial Day 2013 and offered it as a freebie to those who subscribed to Chasing Blue Skies. Since my goal with this ebook was to encourage military wives as well as get my work noticed by more folks, offering it for free to subscribers was a good way to accomplish both.

In addition to expanding my readership while enjoying the privilege of offering a hopeful vision to military wives, writing an e-book was wonderful practice at writing something more book length than post length. Also, this e-book (as well as other writings of mine on the blog and at (in)courage) is what grabbed the attention of my amazing agent Ruth. I signed on with her in late summer 2013.

So all in all, you can see how writing an e-book was a very good move for me.

3. Cultivate relationships. Well before I had an agent or wrote an e-book or a book proposal, I cultivated relationships with people. That is, I naturally and authentically engaged with other writers whose work I found meaningful and beautiful. Many of those folks blogged, so I told them what their writing genuinely meant to me in the comments. In my early blogging days I was much more active on twitter, enjoying conversation with good people–writers and otherwise–all over. After a bit of time, a few of those writers began to return the encouragement and friendships developed. One writer friend introduced me to a publishing acquisitions editor in 2011. And as God would have it, that publishing editor ended up being one who accepted my book proposal for Girl Meets Change in 2014.

Honestly, the friendships I’ve formed throughout this journey mean more to me than the published book. The secondary benefit to authentically and genuinely engaging in a writing community is how it formed the foundation of forward movement in my book writing.

4. Focus more on your writing than your platform. I spend a lot more time learning to write better than learning how to build my platform. In all honesty, I should learn more about building my platform, but that doesn’t excite me like it does others. What excites me is learning a better way to say something. And since that makes me come alive — and a better artist — that’s where I invest most of my energy. Some folks will disagree with me on this, but I’ve found better writing takes you further than bigger numbers.

5. Be willing to take constructive criticism. When my proposal for Girl Meets Change landed at publishers, it was rejected many times. However, one editor kindly and generously offered constructive criticism, and I studied her comments like it was my job. Something clicked after I received those comments, and I was able to edit my proposal and re-submit an improved version that was accepted by two different publishers. And because I had a well-organized, focused proposal, I had an excellent roadmap for writing my book.

If you have received a no or twenty *but* have been blessed with constructive criticism, do yourself a favor and take that feedback to heart. They are gifts because they show your no may really be a not yet. 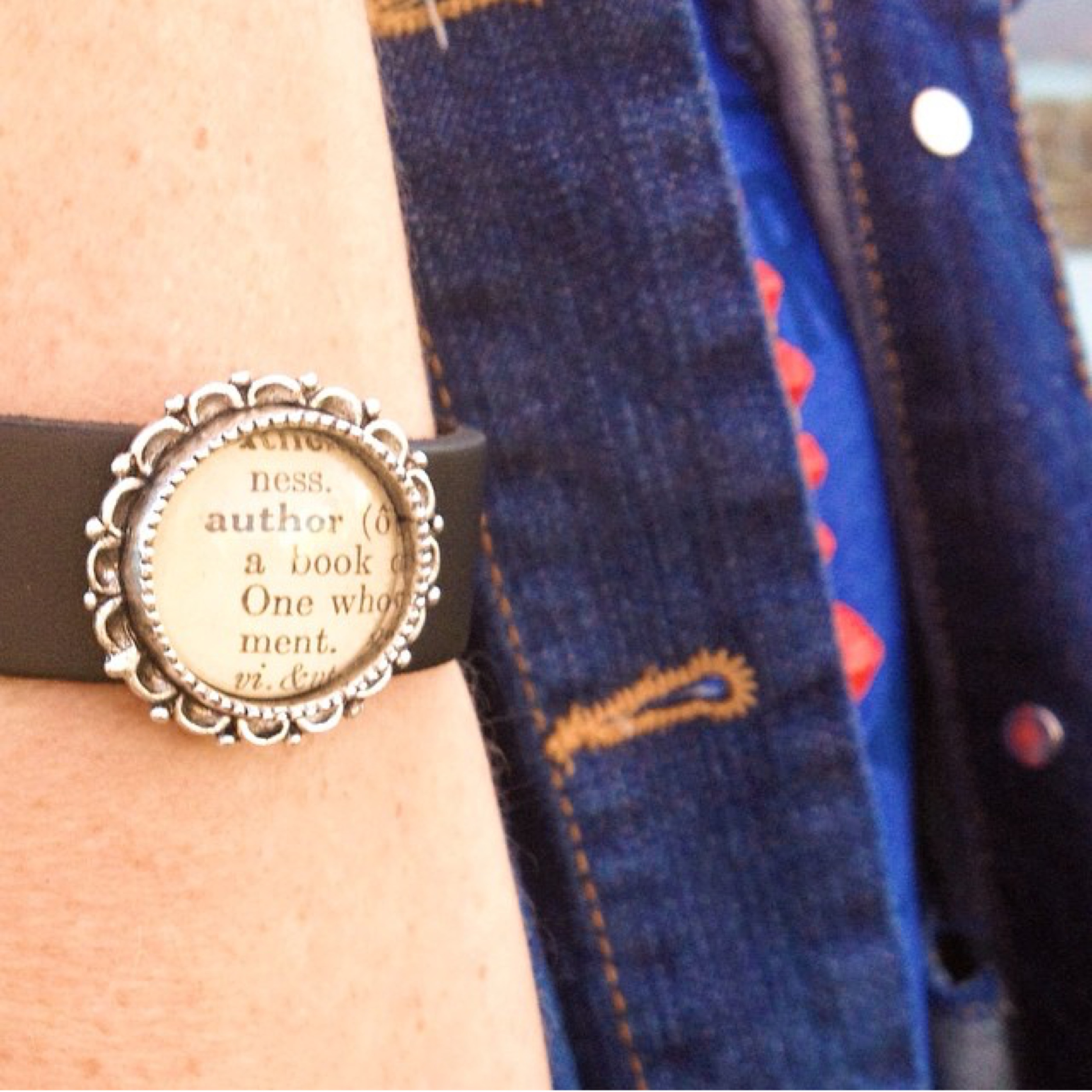 6. Have your when people. That is, have someone who believes in your writing and encourages you to keep at it. This business has more ups and downs than a Six Flags rollercoaster. When you hear a voice inside say, “Stop this foolishness right now and do something productive!” you need an out-loud voice to say, “Keep writing and hoping in things unseen.”

In 2009, my friend Alli wrote me a text that said, “God has gifted you with the ability to write well, and I believe you will be published one day.” I can’t tell you how many times I’ve clung to those words. Along with my husband David, Alli has always talked about my dreams of book writing in terms of when, not if. And that has made all the difference.

7. Remember slow growth is still growth. Here and there I’ve had a platform growth surge (i.e. the e-book I wrote tripled my subscribers), but when I look over my writing history, I generally see slow but consistent growth. I see how my relationships, early articles, blog posts, e-book, and plain ol’ hard work formed a trail from desire to fulfillment. It can be hard to hold onto hope when you are middling, don’t I know. But it helps to practice looking over your history and connect your own dots of progress. Can you find growth–even painfully slow growth–in one form or another?

I know there are no guarantees and not everyone who desires a book deal gets one. But if you are one who desires this yet is letting fear stop you, then perhaps my story will encourage you to keep going. If like me you are one with a modest but meaningful platform, take heart. Your quality writing talent will take you further than your quantity of followers and subscribers. I’m living proof of that.

If you have any specific questions about writing and publishing, fire away in the comments and I’ll do my best to answer. xoxo

« Fresh Air for Your Friday
What I Learned in October »