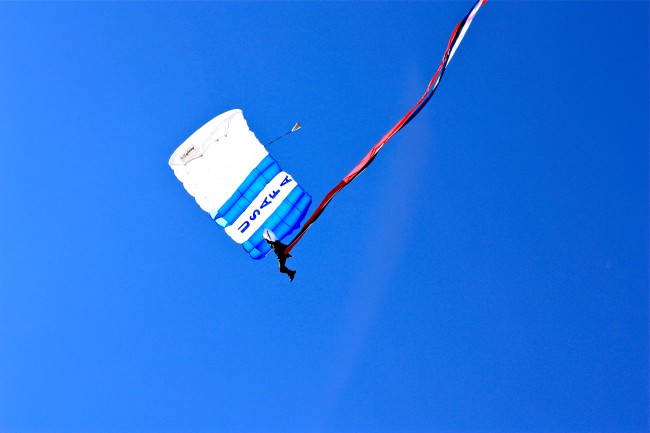 This past Saturday, our family kicked off the fall season by attending a USAFA football game. And in spite of the fact it felt like we were sitting on the surface of the sun {90 degrees at 7,000 feet, y’all}, a good time was had by all.

Before kickoff, we strain our necks and squint our eyes into the sapphire sky to catch a first glimpse of the Wings of Blue parachuting team. Soon they faithfully appear, little hopeful dots high in the heavens.

The point at which the parachuters jump from the plane depends on the direction of the wind. But no matter where they are released – how far to the east or west of the stadium – they always find their way to the middle of the field, landing neatly on the 50 yard line.

I don’t know if they ever get nervous about landing where they’re supposed to – maybe so. Either way, they jump with abandon, trusting in their training to take them to a safe, accurate landing.

After the game, I succomb to another fall staple: a pumpkin spice chai latte. Sipping the creamy goodness, I think about the words our family’s been reading in Genesis, about the early call of Abraham:

The Lord said to Abram, “Leave your country, your people and your father’s household and go to the land I will show you.”  ~ Genesis 12:1

Go to a land I will show you. God asked Abraham to go before He filled in all the answers.

Sometimes doing this feels akin to jumping out of a plane. I think to myself But I don’t know where I’m going to land! What if something goes wrong? And I can’t always trust in my training because hello! I have no training in this area.

So when I find myself in a brand new season, I don’t jump. I hold on sweaty palmed and white knuckled to the way things are.

Abraham didn’t know where God was taking him. He just knew Who called Him to go, and this was enough for him to move forward in obedience. Just like Abraham, you and I can trust in God’s believability and His history of faithful promises fulfilled. When we step forward – or jump! –  in obedience, He will show us where to go and where to land: safely in the middle of His will.

Do you find yourself in a new season today? Is it easy or difficult to embrace? Tell me about it here.