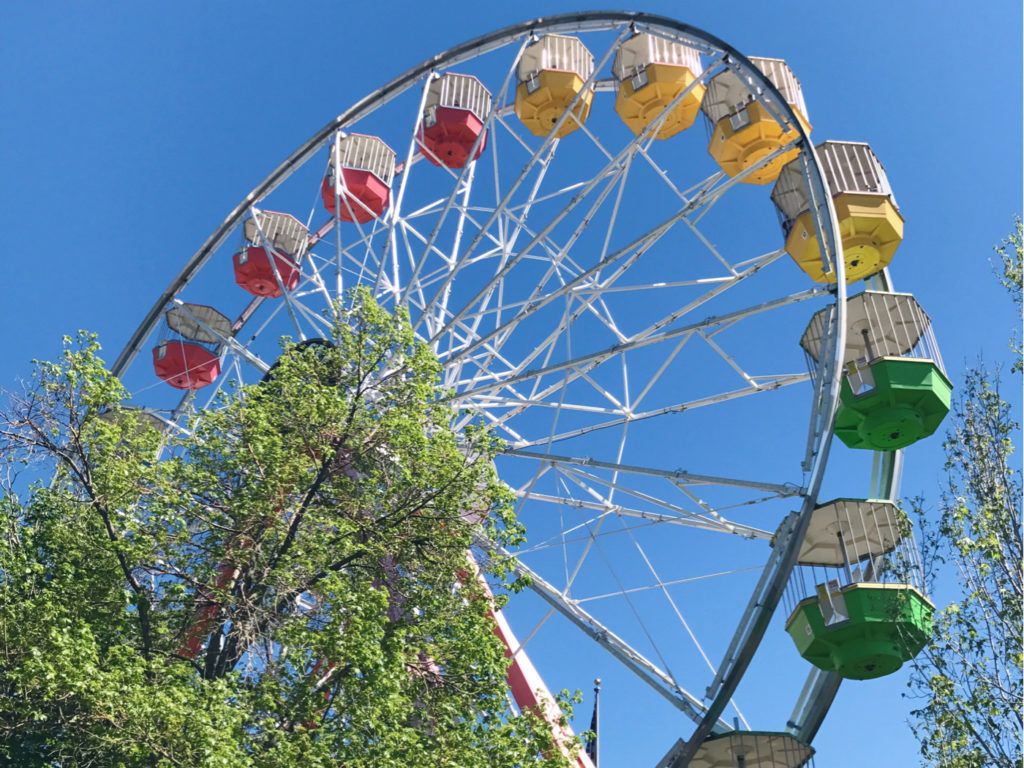 Last Friday, I awoke well before the sun appeared to our corner of the earth. After making sure my daughter was up as well, I fought my bleary eyes to dress and brush my hair. I made myself a chai latte, put it in one of those handy-dandy disposable to-go cups, and finished assembling the sack lunches for my daughter and myself. By 5:30am, we were out the door and on our way to her school.

I later followed the big yellow school bus up to Denver where I chaperoned Faith’s choir for a contest held at an amusement park. They performed shortly after we got there, and they sang very well. I smiled big during Faith’s duet at the beginning of “Beauty and the Beast.”

She loves to sing just like I did at her age.

The choir finished performing by 9am, and that left the next 8 hours for exploring all the park had to offer.

Turns out, my daughter and I really only needed a small number of those hours to explore all the park had to offer, which was primarily roller coasters.

At one point, she said to me, “I don’t know why I can’t have as much fun here as the rest of my friends.”

I looked at her and replied, “Baby, it’s because you don’t love roller coasters. And that’s okay! They don’t have to be your thing.” She acknowledged this, but when another friend came up to ask her to join in on another roller coaster ride, her confidence waned.

Several hours later, we took a hiatus from the park with her choir friends and headed to the buses to eat our sack lunch. Talking more about it, she wondered if she was more afraid of big rides than anything else.

I reminded her that first of all, she’s ridden many big roller coasters on several occasions. She knows what it feels like to ride them, so I didn’t think she could chalk this up to fear. We also talked about how like me, she gets nauseous easily and doesn’t enjoy spinning in endless circles. Not to mention the amped up music and constant screaming. If you’re a highly sensitive person–that is, your nervous system and sensory levels are easily overwhelmed–it’s a whole lot of stimuli all at once.

Over the course of the day, she rode a few rides and thoroughly enjoyed them. But if she didn’t want to ride something, she didn’t. Instead she would grab a snack or visit the animals in a nearby exhibit, and by the end of the day she could still say she had fun doing what she wanted and not doing what she didn’t.

Some of us want all the thrills that hanging from a steel frame doing endless loop-de-loops offers. Some of us are quieter souls who want to run in the opposite direction of the confetti and crowds, who feel like life in general does a number on our senses without having to manufacture more stimuli. And you know what? Neither option is wrong. This world is big enough for the roller coaster and non-roller coaster folks alike.

Of course it’s healthy and good to give something a try in spite of being a little scared to do so. But if you’ve already given it a go and are still only doing it because you feel like you’re “supposed to,” well then, perhaps it’s time to set that thing down and simply cheer on other people who love it. Like roller coasters with my daughter and I, maybe you’re not afraid of it. Maybe you just don’t like or prefer it. In the same way you don’t like tuna, long car trips, or scary movies, it’s just not your thing. Quit trying to talk yourself into liking it–or letting others try to do the same.

It won’t be long now before summer arrives. And as you plan what you and your family will do over the next couple of months, I’d like to gently suggest you include those activities you want to do, not what you think you should do.

As Kara Tippetts used to say, “Don’t should all over yourself.”

Here’s to knowing both–and being completely okay with it.

Here’s to being comfortable–and not apologetic–with how God’s wired you.

Here’s to diving into the seasonal delight that best suits your family–and sitting out on what doesn’t.

Here’s to singing the song you’re created to sing as loudly as you want, be it from the sharp curve of the roller coaster or the cozy corner of a quiet café.

Here’s to being you, and being you well.

« Good Things
What I Learned This Spring »

This beautiful book, Come Sit with Me, releases TO

A lot of Halloween happenings aren't really my thi