Do you mind putting down that Sweet Valley High book so I can share a couple things with you? And just so I know I have your undivided attention, might you turn off Dr. Quinn Medicine Woman, too? Older, still-bossy me wants to offer younger, up-and-coming you a glimpse into your future as well as some pat-on-the-back encouragement for where you are now.

This shouldn’t be too painful. Promise. 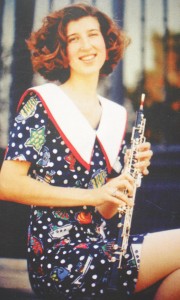 Let’s just knock out the whole body image thing first, shall we? I know you dislike nearly everything about the way you look. From your birth defect to your Roman nose to your laffy taffy arms and legs, you look in the mirror and beg physical changes to hurry up already. Here’s the thing: These years are chock-full of awkward for most girls. I know, I know, not for your golden haired, curves-in-all-the-right-places BFF. But she’s the exception, not the rule. And I’ve got great news! When you grow up, you will love those long arms and legs. More than one person will call you a super model. You will grow into that Roman nose, although it will still keep you from believing the super model stuff. Just ride the tide now of being a head taller than all your non-lanky friends. It will be worth it, I promise.

I know you’re nervous about going to college and wish you could apply to one of the hoity toity out-of-state ones most your friends are going to. But trust me: Where you get your undergrad degree doesn’t amount to a hill of beans, at least not for your major. Save your money girl! And ya know what else? You will love Oklahoma State. You will happily bleed orange and eventually make new friends and one day teach your kids how to do both.

Relax about your grades. It’s one

thing to work hard and do your best. It’s another to make an idol out of a perfect report card. Chill out, don’t be afraid of a B. In fact, just get a B already. You have before and it didn’t kill you. And another thing? In all my grown-up years, not once have my friends and I compared grades. We’re too busy going on and on about old people things like marriage and babies and prices at the pump.

Your figure is darling, so buy shirts and dresses a size or two smaller. Tall doesn’t equal big, and you’re smaller than you think.

With a wave of their hand, people tell you you’re too sensitive. True, you do wear your heart on the outside. It hangs off your sleeve. You take things personally too often, but you’re also a beautifully responsive sister and friend. I love that about you, and so do many others.

That boy your dating but don’t feel super comfortable with? There’s a reason, sweet thing. The real boy you’re meant to be with will saunter your way soon. You will first notice his chocolate brown eyes and the swoony way his biceps fill his sleeves. You will later discover his heart fills his chest and that he will call you beautiful daily, whether you feel that way or not. Whether you act that way or not.

And when your parents ask about him and how old he is? Best own the straight up truth and tell them he’s not just a junior in college but a 26 year old junior in college. Go ahead and tell them he’s in the military, too. Might as well get it all out in the open now. I know you’re scared half to death because you know Daddy isn’t going to like the age difference one bit. And you’re right. Poor Mama will spend days calming him down. But trust me: When the boy visits, Daddy will eventually put the shotgun away and come to love him like the son he never had. Promise. It would be a good idea for you to give up bossin’ those two younger girls who live with you. They are your sisters, not your slaves. Love them hard and don’t take advantage of them. I know this is difficult since one of them has mad sewing skillz and a better eye for fashion than you {this won’t change, by the way}. I know the other is cute as a speckled pup and at 10 years younger, she is super easy to boss. But she watches you more than you know, and she’ll learn a lot about how to treat people from you. While it’s hard to believe, there will come a day when you live far, far away from your sisters. Let them tag along today because you’ll miss them tomorrow.

Now here’s the thing you probably don’t want to hear: I still feel 18 sometimes. I’m a mess who doesn’t have it all together. Nobody does! But the good news is I know better how to handle those gobblygoopy bad-feeling-days. It isn’t about you but about an enemy who would love to destroy you heart, mind, and soul. He gets a kick out of telling you lies. Sometimes he speaks them to you and sometimes he gets others to do it for him. And it still happens today, daggumit. But the difference is now I tell on him sooner than later.

Say Truth out loud, let it ring in your ears. Start learning the Old Testament from the New, God’s steady ways over the shifting world’s. Value His opinion of you over other people’s. He’s easier to please anyway.

You are a doll, for realz. And you are loved wildly.

I wrote this letter in honor of Emily Freeman’s new book for young women, Graceful. It’s the little sister to her 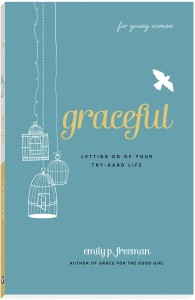 previous book, Grace for the Good Girl. It’s the same but actually completely different, kind of like comparing Dolly Parton’s “I Will Always Love You” to Whitney Houston’s. Recognizable but reworked for a new audience.

On Friday, September 14th, Emily is inviting you to link up your own letter to your teenage self. Whatdaya say about playing along with us?

Also, Emily is kindly giving away two copies of Graceful! To enter, kindly leave a comment telling me a memory from your own teenage years. Without a doubt, this book is a perfect way to love on the young daughters, nieces, babysitters, and friends in your life.